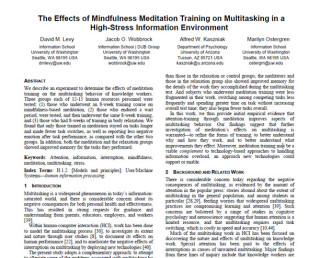 We describe an experiment to determine the effects of meditation training on the multitasking behavior of knowledge workers. Three groups each of 12-15 human resources personnel were tested: (1) those who underwent an 8-week training course on mindfulness-based meditation, (2) those who endured a wait period, were tested, and then underwent the same 8-week training, and (3) those who had 8-weeks of training in body relaxation. We found that only those trained in meditation stayed on tasks longer and made fewer task switches, as well as reporting less negative emotion after task performance, as compared with the other two groups. In addition, both the meditation and the relaxation groups showed improved memory for the tasks they performed.