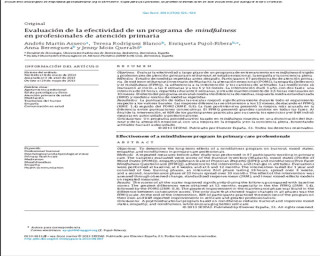 a b s t r a c t Objectives: To determine the long-term effects of a mindfulness program on burnout, mood states, empathy, and mindfulness in primary care professionals. Methods: A repeated measures before-after study was performed in 87 participants working in primary care. The variables evaluated were scores of the Burnout Inventory (Maslach), mood states (Profile of Mood States [POMS]), empathy (Jefferson Scale of Physician Empathy [JSPE]) and mindfulness (Five Facet Mindfulness Questionnaire [FFMQ]), adherence to the intervention, and changes in attitudes. Evaluations were performed at baseline, at 8 weeks, and at 6 and 12 months. The intervention lasted for 1 year and consisted of two training phases, an intensive first phase lasting 28 hours, spread over 8 weeks, and a second, maintenance phase of 25 hours spread over 10 months. The effect of the intervention was assessed through observed change, standardized response mean (SRM), and linear mixed-effects modelson repeated measures. Results: The scores of all the scales improved significantly during the follow-up compared with baseline scores. The greatest differences were obtained at 12 months, especially in the the FFMQ (SRM: 1.4), followed by the POMS (SRM: 0,8). The greatest improvement in the maintenance phase was found in the difference between consecutive scores. The only scale that showed major changes in all phases was the FFMQ scale. At the end of the intervention, 89% of participants practiced the exercises of the program on their own and 94% reported improvements in self-care and greater professionalism.
Conclusions: A psychoeducational program based on mindfulness reduces burnout and improves mood states, empathy, and mindfulness, while encouraging better self-care. © 2013 SESPAS. Published by Elsevier España, S.L. All rights reserved http://www.integraorg.com/wp-content/uploads/2014/03/Evaluacion-de-la-efectividad-de-un-programa-de-mindfulness-en-profesionales-de-atencion-primaria.pdf